- attributed to William of Ockham, circa 1300.
Translation: “Plurality should not be posited without need.”

The above quotation is understood to be a heuristic principle to aid in the comparison of different explanations for a set of known facts.

The principle is often restated as:
‘The simplest possible explanation is usually the correct explanation.’

This idea is frequently invoked by scientists, engineers, or any other class of person involved in rational decision making, very often without thinking. We know instinctively, for example, that when trying to identify the cause of the force between two parallel current-carrying wires, it is useless to contemplate the presence of monkeys on the moon. But this is the most trivial form of application of the Ockham principle, specifying our preferred attitude to entities of no conceivable relevance to the subject of study.

Less trivial applications occur when we contemplate things that would have an effect on the processes we study. In such cases it is still widely and instinctively accepted that we should postulate only sufficient causal agents to explain the recorded phenomena. We tend to see the ‘simplicity’ of an explanation, therefore, to be advantageous. Mathematically, this is related to the complexity of the mathematical model with which we formulate our description of a process.  A linear response model, for example, when it gives a good fit, is seen as more desirable than a quadratic model. This may be partly related to the greater ease with which a linear model can be investigated mathematically, but there is also a feeling that if the fit is good, then the linear model probably is the true model, even though the quadratic model will always give a better fit (lower minimized residuals) to noisy data.

Two problems arise if we try to make the Ockham principle objective:

A slightly loose definition of the simplicity of a model is the ease with which it can be falsified. That is, if a model makes very precise predictions, then it is potentially quickly disproved by data, and is considered simple. With a Bernoulli urn, for example, known to contain balls restricted to only 2 possible colours, the theory that all balls are the same colour is instantly crushed, if we draw 2 balls of different hues. An alternate model, however, that the urn contains an equal mixture of balls of both colours is consistent with a wider set of outcomes – if we draw 10 balls, all of the same colour, then it is less likely, but still possible that that there are balls of both colour in the urn.

To make the definition of simplicity more exact, we can say that the simpler model has a less dispersed sampling distribution for the possible data sets we might get if that model is true. P(D | M, I) is more sharply concentrated.

Mathematical models of varying numbers of degrees of freedom can also succumb to a characterization of their relative simplicity using this definition. If one finds that a simple model does not exactly fit the data, then one can usually quite easily ‘correct’ the model by adding some new free parameter, or ‘fudge factor.’ Adding an additional parameter gives the model a greater opportunity to reduce any discrepancies between theory and data, because the sampling distribution for the data is broader – the additional degree of freedom means that a greater set of conceivable observations are consistent with the model, and P(D | M, I) is spread out more thinly. This, however, means that it is harder to falsify the model, and it is this fact that we need to translate into some kind of penalty when we calculate the appropriateness of the model.

To see how we can use Bayes’ theorem to provide an objective Ockham’s razor, I’ll use a beautiful example given by Jeffreys and Berger1, in ‘Sharpening Ockham’s Razor on a Bayesian Strop.’ The example concerns the comparison of competing theories of gravity in the 1920s: Einstein’s relativity, which we denote by proposition E, and a fudged Newtonian theory, N, in which the inverse-square dependence on distance is allowed instead to become d-(2+ε), where ε is some small fudge factor. This was a genuine controversy at that time, with some respected theorists refusing to accept relativity.

The evidence we wish to use to judge these models is the observed anomalous motion of the orbit of Mercury, seen to differ from ordinary Newtonian mechanics by an amount, a = 41.6 ± 2.0 seconds of arc per century. The value, α, calculated for this deviation using E was 42.9’’, a very satisfying result, but we will use our objective methodology to ascertain whether in light of this evidence, E is more probably the truth than N, the fudged Newtonian model. In order to do this we need sampling distributions for the observed discrepancy, a, for each of the models.

For E, this is straightforward (assuming the experimental error magnitude is normally distributed):

For N, the probability to observe any particular value, a, depends not only on the experimental uncertainty, σ, but also on the sampling distribution for α, the predicted value for the anomalous motion. This is because α is not fixed, due to the free parameter, ε. We can treat α as a nuisance parameter for this model:

To find P(α | N), we note that a priori, there is no strong reason for the discrepant motion to be in any given direction, so positive values are as likely as negative ones. Also large values are unlikely, otherwise they would be manifested in other phenomena. From studies of other planets, a value for α > 100’’ can be ruled out. Therefore, we employ another Gaussian distribution, centered at zero and with standard deviation, τ, equal to 50’’.

P(a | N) can then be seen to be a Gaussian determined by the convolution of the measurement uncertainty and the distribution for α:

We’ll consider ourselves to be otherwise completely ignorant about which theory should be favored, and assign equal prior probabilities of 0.5.

Bayes’ theorem in this case is:

and so we get the posterior probabilities: P(E | a, I) = 0.966 and P(N | a, I) =  0.034, which is nearly 30 times smaller. Because the fudged Newtonian theory has 2 uncertainties, the measurement error, and the free parameter, ε, the sampling distribution for the possible observed discrepancy, a, is spread over a much broader range.

Plotting the sampling distributions for the observed value, a, for each of the two models reveals exactly why their posterior probabilities are so different: 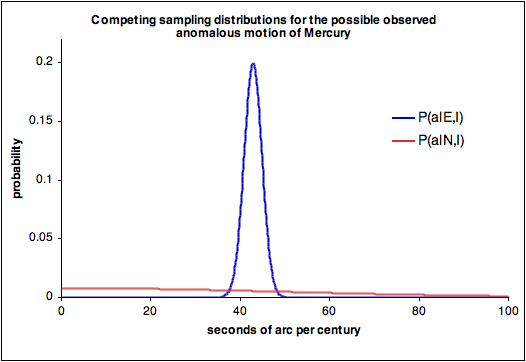 Because E packs so much probability into the region close to the observed anomaly, it comes out far more highly favored than N. If the actual observation was far from 40’’, then the additional degree of freedom of model N would be seen to be vindicated.

We can perform a sensitivity analysis to see whether we would have had a radically different result upon choosing a slightly different value for τ. Plotted below are the results for the same probability calculation just performed, but with a large range of possible values of τ: 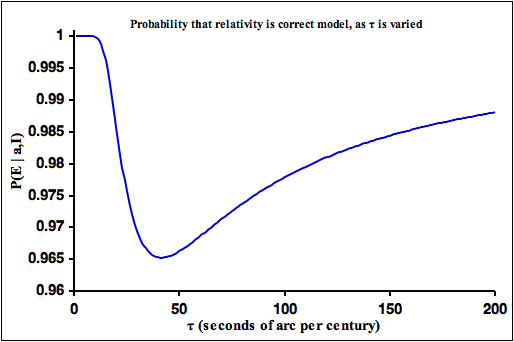 The result shows clearly that we are not doing a great disservice to the data by arbitrarily setting τ at 50’’. The total absolute variation of P(E | a, I) is less than 0.04. We can also experiment with the prior probabilities, but remarkably, the posterior probability for the Einstein theory, P(E | a, I) falls only to 0.76 if P(E | I) is reduced to 0.1. This illustrates the important point that as long as our priors are somehow reasonably justified, the outcome is very often not badly affected by the slight arbitrariness with which they are sometimes defined.

Note that in order for the posterior probability, P(E | a, I), to be lowered to 0.5, the same value as the prior, we would need to increase the experimental uncertainty, σ, to more than 1000’’. This gives some kind of measure of the large penalty paid by introducing one extra free parameter.

The Ockham principle is a vague rule of thumb that, as we've just seen, can be derived from a much more general and quantitative principle, namely Bayes’ theorem. The fact that many people have been intuitively able to appreciate the validity of Ockham’s razor for roughly seven centuries is suggestive of how close Bayes’ theorem is to the way that human brains perform plausible reasoning. And why should it be any different? Bayes’ theorem is derived from robust logical principles, and it is no surprise that natural selection might favor information processing algorithms that mimic those principles.

In its original informal statement, Ockham’s razor may let us down in some cases, where there is strong prior information, where the ‘simplicity’ of two models is difficult to compare using our ill-defined, intuitive understanding of the term, or where the balance between goodness of fit and the penalty for complexity is too close for intuition alone to judge. The more general application of plausible reasoning using Bayes’ theorem, however, provides the best possible quality of inference, allows all these hard-to-define qualities (prior belief, simplicity, goodness of fit) to be objectively quantified, and puts model comparison on a firm logical basis.

Posted by Tom Campbell-Ricketts at 17:42