Here is my version of a simple riddle posed by Jaynes in ‘Probability Theory: The Logic of Science’:

A constant Poissonian light source emits photons at an average rate of 100 per second. The photons strike a detector with 10% efficiency. In one particular second, the detector registers 15 counts. What is the expectation for the number of photons actually emitted in that second? (Assume a detector with no dark counts and zero dead time.)

In case some of the terminology in the question is unfamiliar, ‘Poissonian’ just means that the number of events in any second conforms to a Poisson probability distribution with a mean of s:
Make an effort to work out your best answer to the above question before reading on. Consider writing it down - feel free to record it in the comments below!


Many textbooks on statistics specify 'maximum likelihood' as the state of the art for parameter estimation, so lets see what result it produces here. The likelihood function for a particular model is the probability to obtain the observed data, assuming that model to be true:


where D is the set of data, M is the model in question, and I is the prior information available.

In the cases where the prior information effectively specifies the form of the model, but not the model parameters, then denoting the parameters of the model by θ, this equation becomes


and we have the problem of determining the best estimate of the actual value of the θ from the observed data, which is often assumed to be the value at which the likelihood function is maximized:


In the present case, θ is a single parameter, the number of emitted photons, n, and D is the fact that we have observed c photocounts. P(D | θI) becomes P(c|nϕs). But if n is known, then knowledge of s is irrelevant, so P(c|nϕs) = P(c|nϕ), which is given by the binomial distribution:

Lets examine this solution, though, by considering a different problem. Suppose I am interested in the number of flies in Utrecht, the city I live in. I hang a fly paper in my kitchen in order to gather some data (don’t worry, lab experiments on flies don’t require ethical approval). After one day, there are 3 flies trapped. Unfortunately, I don’t know the efficiency of my detector (the fly paper), but suppose I have good reasons to accept that the average number trapped is proportional to the total number in the population. On day 2, I count 6 new casualties on the fly paper, and announce the astonishing result that in one day, the number of flies in Utrecht has doubled. You’d hopefully respond that I am bonkers - clearly the experiment is nowhere near sensitive enough to determine such a thing. Yet this is essentially the result that we have declared above, under the advice of those who champion the method of maximum likelihood for all parameter estimation problems.


The following data are the result of a Monte-Carlo simulation of the emitter and detector described in the original question: 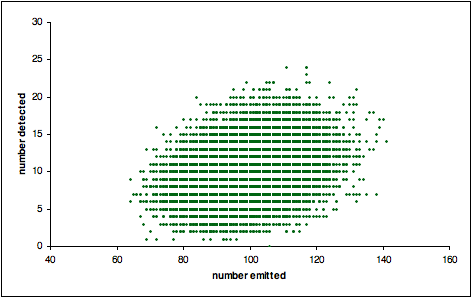 These data represent 32,000 seconds of simulated emissions. First, I generated 32000 random numbers, uniformly distributed between 0 and 1. Then, for each of these, I scanned along the Poisson distribution in equation (1), until the integrated probability first exceeded that random number. This gave the number of emitted photons, n, in each simulated second. Then, for each of these n, I generated another n uniform random numbers. For any of these random numbers less than or equal to the detector efficiency, ϕ, one detected photon was added to the count for that second. Each green dot in the graph above, therefore, displays the emissions and counts for a single second.

The data confirm that 150 emissions in a single second is an extremely rare event (didn’t occur once in the experiment), while 15 photo-counts occurred on very many (more than a thousand) occasions. From the graph above, it appears that the ‘middle’ of the distribution for 15 counts corresponds to somewhere only slightly above 100 emissions. We can get a better view by taking a slice through this graph along 15 counts, and histogramming the numbers of emissions that were responsible for those counts: 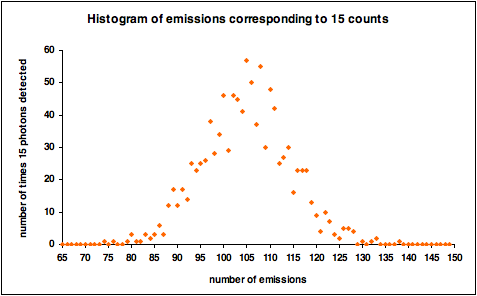 The peak of this histogram is at 105 emitted photons, which is also the average number (rounded) of emitted photons resulting in 15 counts. This is evidently our approximate solution.

Filling in the notation I have defined above, this becomes


Two of these distributions are specified above, in equations (1) and (5).

P(n|s) and P(c|nϕ) can be combined to derive the probability distribution for the number of counts given the source strength, which, in line with intuition, is again Poissonian:


This is, yet again, a Poisson distribution, with mean, s(1-ϕ), only shifted up by c, since with no dark counts, the number emitted can not be less than the number detected. The mean of this distribution is, therefore:


This gives 15 + 100×0.9 = 105 expected emissions, in the case of 15 detected photons. Counter intuitively, the 5 additional counts, above the expected 10, are only evidence for 5 more photons emitted, above the average.

The figure obtained by maximum likelihood can be seen to be another instance of the base-rate fallacy: 150 is equal to the maximum of P(c|nϕs), as n is varied. This is the essence of what maximum likelihood parameter estimation does - given a model with parameter θ, the maximum likelihood estimate for θ is given by argmax[P(data | θ)]. In this case, it takes no account of the probability distribution for the number of emissions, n. What we really needed was the expectation (approximately the maximum) of P(n | cϕs), which is the expectation of P(n | s)×P(c | nϕs). As with the fly paper, the efficiency of the photo detector, (at 10%) was too low to permit us to claim anything close to a 50% excess over the average 100 emissions per second.

Under the right circumstances, maximum likelihood can do a very good job of parameter estimation, but we see here a situation where it fails miserably. As with all rational procedures, its success is determined entirely by its capability to mimic the results of Bayes’ theorem. The answer it gave here differed from Bayes by an order of magnitude, and the reason for that failure was the important information contained in the base rates, P(n|s). In a future post, I’ll discuss another kind of problem where maximum likelihood can give a badly flawed impression, even when the prior distribution conveys little or no information.

Posted by Tom Campbell-Ricketts at 17:10